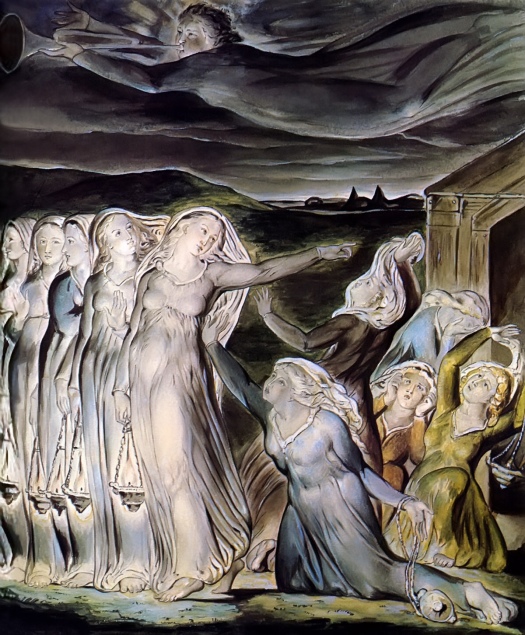 Matthew 25:1-13 says “Then shall the kingdom of heaven be likened unto ten virgins, which took their lamps, and went forth to meet the bridegroom. And five of them were wise, and five were foolish. They that were foolish took their lamps, and took no oil with them: But the wise took oil in their vessels with their lamps. While the bridegroom tarried, they all slumbered and slept. And at midnight there was a cry made, Behold, the bridegroom cometh; go ye out to meet him. Then all those virgins arose, and trimmed their lamps. And the foolish said unto the wise, Give us of your oil; for our lamps are gone out. But the wise answered, saying, Not so; lest there be not enough for us and you: but go ye rather to them that sell, and buy for yourselves. And while they went to buy, the bridegroom came; and they that were ready went in with him to the marriage: and the door was shut. Afterward came also the other virgins, saying, Lord, Lord, open to us. But he answered and said, Verily I say unto you, I know you not. Watch therefore, for ye know neither the day nor the hour wherein the Son of man cometh.”

The story of the ten virgins is very vital for our understanding as to how to operate in the kingdom. Notice that there are 10 virgins, and that these 10 virgins represent the kingdom church, and what I mean by the kingdom church is that those that have a proper understanding of eschatology, or the study of last things, know that we are in the kingdom now, and that the millennial reign of Christ is happening right now; but He rules from the heavenly Jerusalem not on an earthly throne on this present earth. The 10 virgins represent the 1000 year reign of Christ. Each virgin represents the church as a 100 years; so it is the church in each century. 100 X 10 = 1000. The 1000 years itself is symbolic representing an extended period of time. Christ’s comes after his heavenly millennial reign to judge the earth, then we enter into the new heaven and new earth. This story is closely connected to Matthew chapter 7 and Christ’s statement concerning workers of iniquity. We muse be very careful of those who link prophetic words with monetary offerings: saying “God is going to bless you, if you now sow a seed of 1000$ so he can carry out the blessing!” Or “God said for you to sow a seed of $$$ this to get this anointing!” Micah 3:5-7 says “Thus saith the Lord concerning the prophets that make my people err, that bite with their teeth, and cry, Peace; and he that putteth not into their mouths, they even prepare war against him. Therefore night shall be unto you, that ye shall not have a vision; and it shall be dark unto you, that ye shall not divine; and the sun shall go down over the prophets, and the day shall be dark over them. Then shall the seers be ashamed, and the diviners confounded: yea, they shall all cover their lips; for there is no answer of God.” Another translation says Micah 3:5-7 “You false prophets! You who lead his people astray! You who cry “Peace” to those who give you food and threaten those who will not pay! This is God’s message to you: “The night will close about you and cut off all your visions; darkness will cover you with never a word from God. The sun will go down upon you, and your day will end. Then at last you will cover your faces in shame and admit that your messages were not from God.”

2 Peter 2:3 says “…through covetousness shall they with feigned words make merchandise of you: whose judgment now of a long time lingereth not, and their damnation slumbereth not.” The word “merchandise” means a pedlar, or those who buy and sell. As I’ve stated before, the story of the ten virgins is vital in these times: the foolish virgins had no oil in their lamps, so the wise virgins told them to go to them that buy and sell and get oil. Notice, the wise already had oil. Those that buy and sell are those who link prophetic words, anointing’s, and giftings to giving and receiving money! “You and your money perish with you” Peter said to Simon the Sorcerer who thought he could buy the Holy Spirit. At the end of the story, the ten virgins came back with oil (an anointing paid for from a false prophetic voice). But they really didn’t have oil in them at all, the oil represents the Holy Spirit, and he that does not have the Spirit of Christ doesn’t belong to Christ. Jesus says to them when they come to him, I don’t know who you are; the reason he says that is because they were never his to begin with. The wise virgins had oil, they had the Holy Spirit. When it’s all said and done, Christ will say to those who buy and sell, “depart from me, I never knew you!” The church must awake from sleep! God is raising up those that are ready.