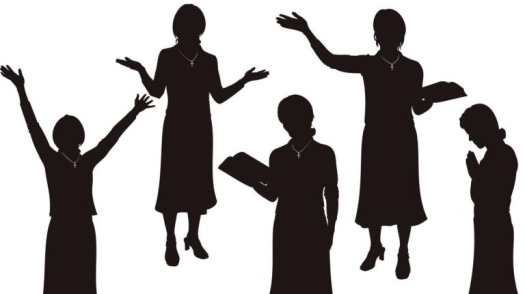 “Women CAN prophesy and BE Prophetess’ they can also co-Pastor with their Husbands if he is a Pastor, Aquila and Pricilla, or co-Apostle, Andronicus and Junia. They can be preachers, (Evangelist). He gave some Apostles, Prophets, Evangelist, Pastors, Teachers (Eph.4:11). An Evangelist is not the same as a pastor.

The word Preacher in the Hebrew is koheleth, or Qoheleth meaning female speaker.

“The Lord gave the word: great was the company of those that published it.”

The word company is feminine here meaning it should say “Great was the company of women that published it” it is correctly interpreted in the TLB Psalm 68:11-13 TLB

[11-13] The Lord speaks. The enemy flees. The women at home cry out the happy news: “The armies that came to destroy us have fled!” Now all the women of Israel are dividing the booty. See them sparkle with jewels of silver and gold, covered all over as wings cover doves!

“The Lord gives the word; the women who announce the news are a great host:”

The Bible began this fulfillment when Mary began to proclaim the gospel that he was risen!

Paul’s setting in 1 Corinthians May be understood with speaking in tongues and interpretation. Women were not allowed to speak (in tongues as a message or interpret) but ask their husbands (assuming all women are married?) it’s possible because at the time the oracle of Delphi was a woman and she used ecstatic speech to give messages as a spirit of divination. Paul ran into a young woman possessed in the region with that demon of python that tried to align herself with Paul by confirming they were men of God. Paul through discerning of Spirits was vexed and cast the demon out. Wives of course should not usurp authority over the HUSBAND or men in the congregation. So we need proper context of the verse. It’s a Husband and Wife relationship. So women that prophesy or are Prophetess’ need to cover their heads in prophecy so not dishonor their head, the scriptures say because of the angels, meaning to show the angels that they are under authority. Genesis 6 could have been the result of women not understanding their place is why the fallen angels went into women and they bare Giants. Demonic infiltration and doctrines of demons.

Notice in Revelation that Jesus came against Jezebel, she called herself a Prophetess only so she could teach the people. She wasn’t a Prophetess, but so she could have influence to seduce by teaching:

Revelation 2:20 (KJV) “”Notwithstanding I have a few things against thee, because thou sufferest that woman Jezebel, which calleth herself a prophetess, to teach and to seduce my servants to commit fornication, and to eat things sacrificed unto idols.”

Notice she wasn’t a Prophetess, but she called herself a Prophetess in order to teach men, but that led in seduction.

The word seduce here means to (properly, cause to) roam (from safety, truth, or virtue):–go astray, deceive, err, seduce, wander, be out of the way.

So as soon as a woman begins to teach a man she is out of the way and into the way of error and seduction because it’s against God.

Now I believe a Prophetess can prophesy to all men and women.

But Jezebel in this passage is not a Prophetess, she CALLED HERSELF one JUST to teach, she tried to legalize herself with a title to do something illegal in God’s eyes.

In a larger setting women cannot teach the congregation of men and women combined, but they can teach women and children Titus 2:3 (KJV) “The aged women likewise, that they be in behaviour as becometh holiness, not false accusers, not given to much wine, teachers of good things; Titus 2:4 (KJV) “That they may teach the young women to be sober, to love their husbands, to love their children,

According to 1 Timothy 2:11 (KJV) “Let the woman learn in silence with all subjection. 1 Timothy 2:12 (KJV) “But I suffer not a woman to teach, nor to usurp authority over the man, but to be in silence. The reason why women are not to teach men is because they’ve already taught them in rearing them as children, they are the first teachers.

So what about all the women pastors who are not married to male pastors or single? What is this a sign of?

Isaiah 3:12 (KJV) “As for my people, children are their oppressors, and women rule over them. O my people, they which lead thee cause thee to err, and destroy the way of thy paths.” It is important to understand that women in ministry are a key factor in the kingdom; but what is God saying concerning the latter years, or the end time? What is wrong with a woman in rulership that the Father is saying to us?

This is prophetic concerning endtime’s before the return of Christ.

Women who are not under a covering are prone to deception: 1 Timothy 2:13 (KJV) 13 For Adam was first formed, then Eve. 1 Timothy 2:14 (KJV) “And Adam was not deceived, but the woman being deceived was in the transgression. Eve was deceived because she moved from under the authority of Adam. The woman in Revelation 12 is different from the woman in Revelation 17: one birthed Christ into the earth, the other is Antichrist. First century Jerusalem were the purveyors of the antichrist spirit in that they rejected Jesus as the Messiah, so they spread the idea. 1 Corinthians 11:3 says “But I would have you know, that the head of every man is Christ; and the head of the woman is the man; and the head of Christ is God.” This passage is complementarian. The Galatians saying there is neither male nor female should be understood in regards to salvation, meaning we all have the same privilege to be called Sons and Daughters.  When a woman (single or married) moves from under this paradigm they become part of that antichrist agenda in that they have no covering. The notion that a person man or woman can go to the Father without going through Christ Jesus is the antichrist spirit.

Revelation 9:7-8, says “And the shapes of the locusts were like unto horses prepared unto battle; and on their heads were as it were crowns like gold, and their faces were as the FACES OF MEN. And they had hair as the HAIR OF WOMEN, and their teeth were as the teeth of lions.” The enemy is on assignment and his assignment is to attack women. In Genesis 6, the enemy attacked women when the fallen angels cohabitated with women and they bore giants in the earth, therefore corrupting the male seed. It was a demonic alignment. Paul says something that is easily looked over in 1 Corinthians 11:10 says, “For this cause ought the woman to have power on her head because of the angels.” This power is an outward covering (as a woman prays and prophesies) that hides the natural glory of her hair. Now this may sound foolish to some, but Paul lets us know that the fallen angels in Genesis saw the glory of the woman and brought about this demonic alignment. There is an alignment of the demonic that have the hair of women and the faces of men, it is an army that is out to destroy women! And it is out to destroy what she is meant to carry!!

How do you know we’re living in the endtime? Isaiah 3, 4:1, is a key indication. Isaiah chapter 4:2-6 is the answer for our society and the church is The Gathering Place, we gather under under Christ!