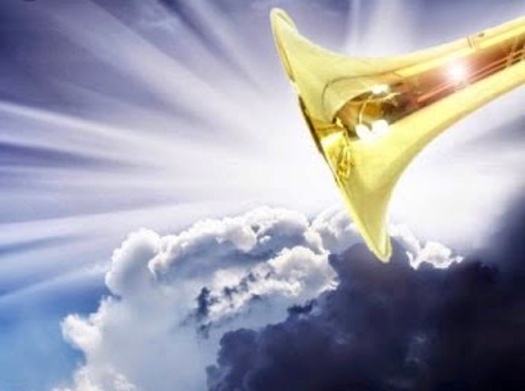 “This seventh and final trumpet of Revelation is the only trumpet that will be heard, because it will usher in the Messiah. But the trumpet sounds first in the Spirit calling forth those to salvation during the heavenly reign of the Messiah. It begins as a sound in the Spirit that no one has heard physically into the long blast of the resurrection of all dead.

Christ ascended into heaven and sat down at the right hand of the Father. But the regeneration or the “millennial” reign begins after the destruction of Jerusalem in A.D. 70. This begins our Jubilee trumpet that takes each of us into the kingdom age by the new birth first, it is called the first resurrection. The first resurrection is NOT a physical resurrection. It calls us to sit in heavenly places in Christ. The kingdom began first in the Spirit when the Holy Spirit came on the day of Pentecost.

The seventh trumpet begins to be heard when Christ returns after the millennium. Now the millennium is not a literal thousand years; but it represents a prolonged period of time. Once Christ returns the seventh vial will be poured into the air to break the gravitational pull in the earth, so the people of God can be caught up in the clouds to meet the Lord in the air (1 Thess. 4: 16,17). Not only will this vial break the gravitational pull, but it will render Satan, who was the prince of the power of the air, helpless.

The Church in the kingdom age was and is the Lord’s Christ in the earth ruling with a rod of iron over the nations left from Armageddon which was the destruction of first century Jerusalem (Rev. 2: 26,27). Authority was given to the church and it is clearly seen with the overthrow of the greatest human kingdom of Rome.

After Christ comes the church is only caught up to escort the King of kings to the earth for the Judgement of the world: John said “And the temple of God was opened in heaven, and there was seen in his temple the ark of his testament…”

In the Old Testament the ark represented the presence of the Lord. Within the ark was the tables of stone, the golden pot of manna, and Aaron’s rod that budded. God would come to commune with the high priest once a year over the mercy seat of the ark as the priest made atonement for Israel’s sin. But when we come to the New Testament, Jesus is the ark of the covenant. The word ark in the Hebrew means coffin, and the children of Israel carried the box for all those generation’s not knowing that it pointed to Jesus who had to lay down in the ark for three days and three nights. It was a funeral! It was a shadow of the burial of Christ! Jesus was the word in the coffin, he was the true manna that came down from heaven, and he was Aaron’s rod that budded. And now he’s not a dead word in the ark (coffin), but he’s the living word inside of every believer. We have the presence of the Lord inside of us. No wonder Deut. 33: 27, says “The eternal God is thy refuge, and underneath are the everlasting arms: and he shall thrust out the enemy from before thee; and shall say, Destroy them.” The phrase “… everlasting arms…” is talking about the wings of the Cherubim over the mercy seat. Angels are messenger’s; but Jesus is the Messenger of the Covenant, whose arms were outstretched on the cross for an everlasting memorial of our atonement being paid and full. When he returns, he will cast out the last enemy to be destroyed, which is death.

At the entrance of the seventh vial, Rev. 16: 15, says “Behold I come as a thief. Blessed is he that watcheth, and keepeth his garments, lest he walk naked, and they see his shame.” The second coming of Christ will be as a thief on those that are not aware”